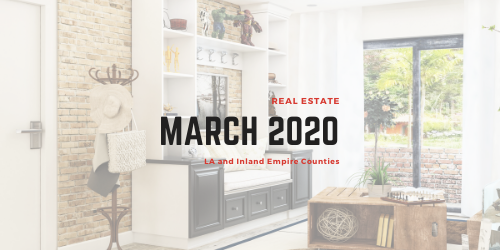 At first, news of the Coronavirus seemed like a distant crisis on the other side of the world. Then, at the end of January, the first case on U.S. soil was announced. It was not until the end of February when top federal health officials warned that the virus would spread in the United States.

Since then, everyone has been confronted with a deluge of information and misinformation. Many are stockpiling water, toilet paper, canned goods and everyday essentials. The response has been similar to Y2k when the banking system and world economy was supposed to crash due to a computer glitch in ringing in the year 2000, which never materialized.

As the virus began to spread out of control not only in China, but South Korea, Italy and Iran, Wall Street and financial markets around the world panicked and moved their money out of stocks and into long term bonds, United States treasuries. When that occurs, long term mortgage interest rates fall. After falling to an all time low, they spiked back up last week due to a lack of an appetite for mortgage backed securities in the secondary market. The Federal Reserve stepped in over the weekend and is going to reinstitute Quantitative Easing, which will ultimately bring interest rates down to historically low levels once again.

So, how will the Coronavirus outbreak affect housing? There is no absolute, 100% certain answer. Instead, it all boils down how long this crisis will last and how large of an impact it will have on United States soil and the rest of the world. In China, the number of new cases is dwindling, a glimpse of hope that this too will end. Currently, the data does not indicate any change in the local housing market. The supply of homes to purchase in our market is at its lowest level for a start to March in a couple of years, and demand (last 30-days of pending sales) is at its highest level since 2012. With not enough supply and strong demand, the Expected Market Time (the time between pounding in the FOR-SALE sign and opening escrow) is at 52 days, a HOT Seller’s Market and its lowest level since 2013.

Regarding the supply of homes, the Coronavirus may inhibit some homeowners from placing their homes on the market the longer the outbreak lasts. For now, there has been no real noticeable change in the number of homes coming on the market. Year over year looks nearly identical. That is something to watch as housing makes its way through the hottest season of the year, the Spring Market.

As for demand, the virus could turn some would be buyers into fence sitters, not desiring to purchase in this environment of uncertainty. Yet, at the same time, many fence sitters will be replaced with more buyers looking to cash in on these record low mortgage rates. Some potential purchasers are worried about the overall economy and a potential recession instigated by the Coronavirus. But, the economy has a far way to fall as today’s macroeconomic United States charts are really strong.

The Coronavirus will affect the housing market to some degree, but not to the extent that many fret about. Society tends to worry about the worst-case scenario and overreact. Housing will not fall off a cliff. In fact, housing today is HOT and is heavily leaning in favor of sellers. Mortgage rates in the low 3’s will help prop up the housing market.

Worrying about the worst-case scenario is an exercise in futility. Instead, have faith that the present day’s advanced, connected, collaborative society will overcome this virus. Do not panic; instead, wash your hands frequently and be prepared for the current housing expansion to continue.

The multiple listing data appearing on this website, or contained in reports produced therefrom, is owned and copyrighted by California Regional Multiple Listing Service, Inc. ("CRMLS") and is protected by all applicable copyright laws. Information provided is for viewer's personal, non-commercial use and may not be used for any purpose other than to identify prospective properties the viewer may be interested in purchasing. All listing data, including but not limited to square footage and lot size is believed to be accurate, but the listing Agent, listing Broker and CRMLS and its affiliates do not warrant or guarantee such accuracy. The viewer should independently verify the listed data prior to making any decisions based on such information by personal inspection and/or contacting a real estate professional.

Based on information from California Regional Multiple Listing Service, Inc. as of the most recent time synced and /or other sources. All data, including all measurements and calculations of area, is obtained from various sources and has not been, and will not be, verified by broker or MLS. All information should be independently reviewed and verified for accuracy. Properties may or may not be listed by the office/agent presenting the information